This year DetroitDevDays will be producing the fourth annual 1DevDay Detroit Software Developer Conference.  To accommodate our target attendance of 500 we are planning to use space at the Cobo Conference Center in Downtown Detroit on Saturday, November 17th.

The DetroitDevDays mission is to build a software developer community in the Detroit area that is regarded as the best in the world.  DevDays educate and unite our Software Developer community with inclusive, accessible and affordable events and conferences. The events are typically held on Saturdays so we do not conflict with attendee work schedules. The cost to attend is kept as low as possible, so developers of all pay scales can afford a ticket.

DevDay attendees are Software Developers and Software Architects from Michigan, Ohio, Ontario and from as far as Illinois who are passionate enough about what they do to spend their Saturday, absorbing new technologies and networking with like-minded professionals.

Many in the Detroit area are not in a position to attend conferences in California, Las Vegas or New York so; DevDays are way to bring great speakers and workshops to them.

This year DetroitDevDays will be producing the fourth annual 1DevDay Detroit Software Developer Conference.  To accommodate our target attendance of 500 we are planning to use space at the Cobo Conference Center in Downtown Detroit on Saturday, November 17th. 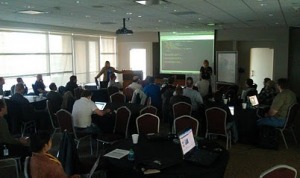 1DevDay will remain the much-loved polyglot Developer conference it is known for.  We want to make this event a celebration of the profession of Programming, App and Software Development in Michigan.   Our goal is to make 1DevDay the “must attend” event for Software Developers in Michigan.

This year, several sessions will be dedicated to panel discussions and workshops that will focus on the theme of growing our profession i, growing App and Software companies and to introducing developers to the many new opportunities in Michigan.  We are calling this the Michigan Developer Summit.  We plan to attract sponsors and representation from Detroit area Software companies and IT shops that are serious about their programmers.   We also plan to reach out to start-ups seeking passionate Developers interested in becoming co-founders and entrepreneurs.

To accommodate the number of expected attendees and to provide room for growth we are holding 1DevDay at Cobo.  In the past we were forced to turn attendees away due to space requirements.   This year, we can add as many rooms as we like and we will not have sessions that are standing room only.

We are proud to bring 1DevDay to this historic location.  Cobo Center sits on the Detroit River and is situated along Jefferson and Washington avenues.  Cobo was named for Albert E. Cobo, mayor of Detroit from 1950 to 1957. Designed by Gino Rossetti, the center opened in 1960. There are about 5,000 hotel rooms in downtown Detroit with 4,000 hotel rooms within walking distance of Cobo Center.

David McKinnon is an Application Developer with Detroit Labs.   He has worked as a developer in the Detroit area for over 20 years.  He was a leader of the Detroit Java User Group for 5 years and is founder of DetroitDevDays, including 1DevDay Detroit, ModiDevDay and CloudDevDay.    David has grown the DevDay mailing list from 80 to 1100 software developers.

Don Ward –  Don Ward has been a co-organizer of many DevDays  including CloudDevDay, MobiDevDay and various 1DevDay Conferences.  He has also been a frequent volunteer at various Detroit user groups for years.  A Mobile App Developer with Quicken Loans he is also Leader of the Detroit Chapter of the Google Developer Group.

David Giard – is a legend in the Midwest’s Microsoft Developer community.   David Giard has been developing solutions using Microsoft technologies since 1993. In the past, he has spoken at Day of .Net, CodeStock, Microsoft DevCares, Microsoft ArcReady, .Net University, X Conference and numerous user groups around the Midwest. He is a recovering certification addict and holds an MCTS, MCSD, MCSE, and MCDBA, as well as a BS and an MBA. He is the host and producer of the mildly popular online TV show Technology and Friends (http://technologyandfriends.com). He is president of the Great Lakes Area .Net User Group. He is an avid photographer and has visually documented many of the Heartland community events. You can read his latest thoughts at http://www.DavidGiard.com.

Onorio Catenacci has 25+ years of software development experience in the Detroit area.  He currently works at Quicken Loans.   Onorio has been an active volunteer at area user groups and at several DevDays and conferences.   He is leader of the F# special interest group and the founder of the Great Lakes Functional Programming Conference.